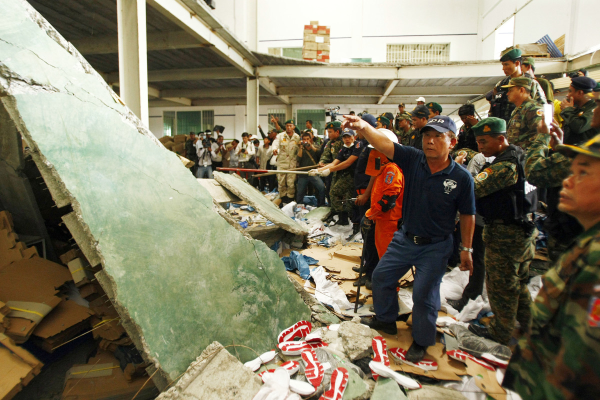 Early Thursday morning, the ceiling of a factory in Cambodia which manufactures Asics shoes collapsed while workers were inside, killing two people and injuring seven. This comes as the latest tragedy to shed light on slipping global garment industry safety standards.

When the collapse occurred, there were nearly 50 workers inside of the factory just south of the capital Phnom Penh. The suspected cause of the collapse was heavy iron equipment that was being stored on the floor above. After searching through the rubble for several hours, it has been confirmed that nobody else was trapped inside. "We were working normally and suddenly several pieces of brick and iron started falling on us," recounted Kong Thary, one of the seven injured in the collapse.

The factory was identified as a Taiwanese-owned outfit called Wing Star that produces Asics shoes for regular import to the United States and Europe stated Chea Muny, chief of a trade union for factory workers.

Shockingly, the facilities were opened just one year ago, much too soon to experience structural failure under normal conditions. The area where the collapse occurred was primarily used for storing production equipment, but contained a small work area where the people were working during the collapse. Innitial evidence suggests that the ceiling was poorly built and lacked the proper construction to support heavy materials.

The garment industry is Cambodia's largest export earner, employing over 500,000 people in several hundred shoe and garment factories. In 2012 alone, the small Southeast Asian nation shipped over $4 Billion worth of product the the United States and Europe.

This comes just three weeks after the collapse of a garment factory in Bangladesh which tragically killed 1,127 people and injured thousands. On the heels of the worst disaster in history for the global garment industry, this event calls attention to the safety conditions in factories around the world. This shows that the problems are not isolated to just Bangladesh, but to many countries where companies are taking shortcuts to drive costs down and turn higher profits.